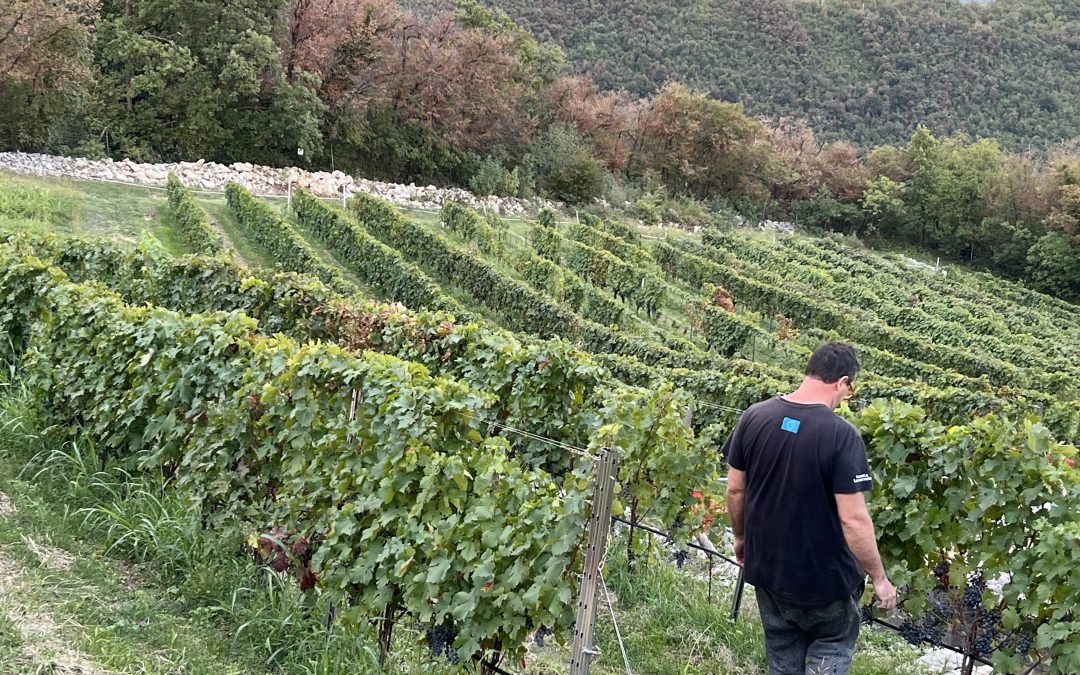 Upon arriving in Northern Italy, I found a frighteningly arid landscape dotted with obvious signs of drought. Half the country had received no more than two solid rainfalls throughout the entire calendar year. Climate change is very real and especially felt in the agricultural sector. The effects of nature’s wrath are immediately apparent in the current product and what comes after. It might seem obvious, but consistent temperature swings amid oppressive, record heat do not positively impact the landscape or the animals that tend it. One of the most impressive elements of the various viticultural practices I witnessed was the commitment to biodiversity. Bringing in animals as opposed to tractors leaves the vines to grow as nature intended them, without pesticides or unnecessary additives. Often, fruit trees and other forms of vegetation are encouraged to help cross-pollination and to keep the soil fresh and fertile. I visited a biodynamic farm near the Swiss border in the hills of Valtellina that grew some of the best apples I have ever tasted. It was an unknown heirloom variety, mainly offered to their horses, goats, and other grazing animals as a nice nutritious snack.

I planned my departure at the beginning of September. I hoped to witness the various stages of the harvest and the processing and fermenting in the cellar that follows. Unfortunately, due to the unprecedented temperatures and lack of rainfall, harvest timelines were significantly expedited. I arrived to find the work already halfway completed. Smaller producers like Andrea at Armonia and Franco at Fondo Bozzole often rent and farm multiple parcels in various locations around their home bases. Resulting in the need to schedule harvest in a manner that is both doable and geared toward ensuring maximum ripeness. Multiple passes are often required for the same row within the same vineyard. I quickly discovered that ‘harvest’ wasn’t as simple as plucking grapes from the vines. To maximize the vitality and vigor of certain, larger clusters, ‘pickers,’ as we are affectionately called, are encouraged to snip smaller bunches in a bit of preemptive pruning. This action lightens the load on the plant. Thus allowing the plant to direct more energy toward ripening the remaining, fuller clusters. Often, several smaller grapes have ripened prematurely and almost resemble raisins on the vine. These are included in small amounts during harvest to add an element of “appassimento,” an Italian enological term referring to the increased concentration and alcohol obtained from these naturally dehydrated grapes. Volcanic Vicenza and Mountains of Basil

Andrea’s vision of a winery includes the space to sponsor and patronize younger, upcoming producers to cultivate a more holistic and responsible vision for natural winemaking in the Veneto region and Italy in general. The various crew participating in the harvest and cellar proceedings also have their own smaller bottlings made alongside the larger, more official Tenuta Armonia productions. He works alongside his father, another self-taught guru of the Vicenza wine scene. Together they produce some of the most flavorful artisanal pizza in the area and some fantastic and funky natural wine. I enjoyed my time in his “compound” immensely. I often found myself pitching in to help with many culinary tasks far removed from the cellar. To top and serve those fantastic pizzas, all of the sauces are made in-house from produce grown in the downstairs gardens. This means an impressive amount of prep work. Hours are spent chopping green tomatoes for a fermented pizza sauce, countered with hours picking crates worth of basil and separating the flowers and brown leaves until my hands smelled profoundly of the sweet, almost peppery herb. The act of harvesting itself is intense, manual labor that takes place for long hours under the sun amidst mosquitos, bees, and a whole host of other wildlife. Maintaining positive morale and high spirits is essential. Pickers are incentivized to pay attention to their work to ensure the proper grapes are selected. Distracted pickers might not care for the grapes with as much love as is genuinely required. I recall many “lunches” of copious slices of either mortadella or prosciutto, often crammed between fresh bread and a hunk of salty cheese. I devoured the overflowing sandwich while resting on the cool grass, usually with a chilled white or orange wine. We lacked glassware in the field and ended up drinking out of a plastic water bottle cut into several pieces. Don’t ask me how; it just works.

TO BE CONTINUED IN THE ITALIAN DISPATCH #3

Join Us for Dinner!

Inspired by working harvest in Italy this Summer, our very own Evan Kretmar presents a four-course wine dinner of elevated Italian comfort foods. This one-night-only event is the culmination of his travels, documented in his Italian Dispatches. Join us as Evan shares his inspiration and the food of Italy that sustains him. Wine pairings by Tim and Evan, Food and words by Evan!